Wow, so within the next year and a half, my longtime dream of being a novelist will come true. I am currenly working on a number of projects, from children's to YA, that will be released over the next 18 months and it has really got me thinking about how we identify ourselves to the world…and to ourselves.

I've always been "a writer," having been published since my teens, and yes, paid for it. But over the last twelve years, I've focused on non-fiction, oh, writing a few scripts here and there, but mainly putting out a steady stream of non-fiction books. I began to view myself, and be viewed by others, as a "non-fiction author" who does a ton of research and writes books about everything from the paranoramal to science to metaphysics and all points in between. Someone who does a lot of radio interviews, speaks at events and writes articles for magazines about…well…non-fiction.

So now I find myself feeling a little shaky and off center, but in a great way, because the doors that are opening are doors I've wanted to open for a long, long time. But my identity…will I now view myself as a "fiction author" and "storyteller?" Will others change their view of who I am and what I do?

I guess in the end I am just as I have always been…"a writer." I am expanding my reach now and moving into a format that I may not yet be known for in terms of my public persona. I just hope that readers accept me for who I am, and who I am becoming.

3 GATES OF THE DEAD by Jonathan Ryan

Hey, I have a friend and colleague named Jonathan Ryan who is releasing a book in October.
It's called 3 GATES OF THE DEAD and promises to be a real thrill ride!

Conflicted with his faith in God and the hypocrisy of the church, Aidan Schaeffer, a young assistant pastor, is in a constant state of spiritual turmoil. When Aidan learns that his ex-fiancée is the first victim in a string of ritualistic killings, he finds himself catapulted into an even deeper fight. Tormented by demonic threats and haunted by spirits, Aidan throws himself into investigating Amanda’s death; all the while supernatural forces have begun to attack the people around him. The more questions he asks, the more he is drawn into the world of a mysterious Anglican priest, a paranormal investigation group and a rogue female detective investigating the murders. As the gruesome rituals escalate, ancient hidden secrets and an evil long buried threaten to rip apart Aidan’s world. 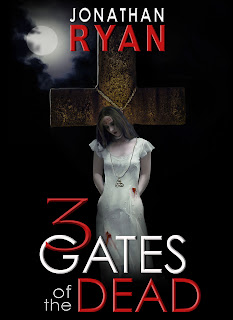 Jonathan is an amazing talent and I am excited for his book launch!!!
Posted by Marie D. Jones at 12:01 PM No comments:

Like a lot of women, I often have a problem with people taking advantage of my kindness, generosity and caring, even with my ability to get things done fast. That seems the case with so many of my female friends, and hey, I’m not just saying it’s the OTHER gender that takes advantage...because women take advantage of other women, too. Even their friends and family. It happens to everyone at some time.

So I thought about why this is the case. Why do so many people think it’s perfectly OK to behave like this, and are these people even aware they are doing it? My conclusion is, they don’t know. They are not aware. Perhaps it’s how they were raised, to believe they were entitled to others doing everything for them. Perhaps they are just lazy and arrogant and believe they shouldn’t HAVE to work hard when there are others around to do it for them.

But perhaps...just perhaps...taking advantage of another person masks a very deep-seated fear of inadequacy and insecurity in one’s own abilities to do things, to be successful, to go for it. Hey, if someone else can go for it FOR you, why bother? But if you want to become a strong, self-sufficient person with a solid identity and the ability to pursue your own life vision and make your dreams and goals come true...you cannot do it through another person. Because in the end, it will be THERE vision that manifested, their hard work that is rewarded, their goals that are achieved, and once again you will be able to tell yourself you could have done it all if

Hell to the yes. And when I got real and admitted that truth, I realized that other people could never make my life better, or make my dreams come true, or solve my problems for me. I also realized that people take advantage of me because I allow them to. And by putting up new boundaries and standing up for myself and realizing I am worth being respected and cared about, I hope it doesn't happen much anymore. I hope I never take advantage of anyone else either. I will do my best to try to avoid being at the giving end as well as the receiving end.

Do unto others comes to mind.
Posted by Marie D. Jones at 4:09 PM No comments: